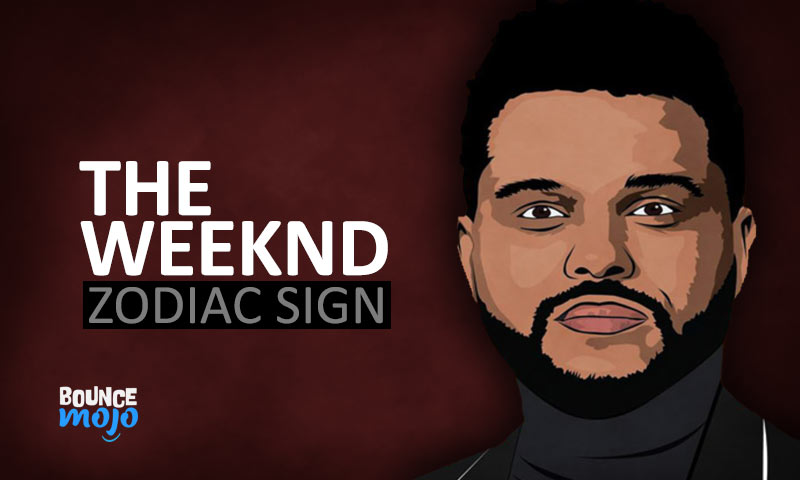 The world hasn’t moved on from The Weeknd’s dark mystique just yet.

This creative singer and songwriter had us all in the palm of his hands by posting cryptic messages and images before debuting his songs.

But, you’d be surprised…

Fans might be wondering what’s in it for the intriguing artist.

Turns out, The Weeknd’s zodiac sign isn’t so dark, after all.

Stick with us as we divulge all the juicy details on:

Ready for the weekend? I am too. Let’s begin, shall we?

Who is The Weeknd?

The Weeknd was born on February 16, 1990, in Toronto, Ontario Canada as Abel Makkonen Tesfaye.

Turns out, he was born on a Friday and not on a weekend – yes, I looked it up! Why he calls himself “The Weeknd,” we’ll never really know.

The world was first blessed with his creative genius sometime in late 2010 when he posted anonymous songs on YouTube under the name The Weeknd.

He piqued the crowd’s interest when he also followed that up with cryptic posts and photos on different social media platforms. People were starting to speculate whether he was a male, a female, or a group…

… or even artificial intelligence!

Throughout 2011, The Weeknd released 3 nine-track mixtapes, namely: House of Balloons, Thursday, and Echoes of Silence, all of which are critically acclaimed.

He built an interesting online presence by releasing even more free mixtapes while being unsigned and independent for 2 years before signing with Republic Records.

In September of 2020, Abel signed with Republic Records in a joint venture with his own imprint, XO. The compilation album for his mixtapes titled Trilogy charted at #4 in the U.S. Billboard 200 and #5 on the Canadian Album chart.

The Weeknd has since released 4 albums and all of them are bestsellers, gaining him 3 Grammy awards and 8 BMAs among many other trophies.

Abel has sold over $70 million from his albums in the US alone, and he’s not done yet!

The Weeknd’s lyrics are often deeply personal and deal with subject matters such as sex, drugs, and partying.

Birth Chart for The Weeknd

The Weeknd’s birth chart reflects all the celestial bodies in the sky when and where he was born.

The designation of the houses is centered around The Weeknd’s birth time and starts with the rising sign (seen as a pink-colored line from the graphic’s center to the left. It continues anti-clockwise.

Although Abel Tesfaye’s time of birth is unknown, all his major planetary placements can be studied.

The Weeknd has 5 planets in Capricorn.

as it’s one of the most dominant in his personality today – this planet is one of the 5 which are in Capricorn.

Martian Capricorns have a very controlled approach in life – subdued even.

… they could come off as unenthusiastic in life. But the truth is, they’re low-key determined to work and be on top of things.

Their ambitions are very well-defined and they know what they want to do. People with Mars in Capricorn are not afraid of doing hard work for the sake of their dreams.

May it be with emotions, sexuality, anger, or drive, they have a powerful need to stay in control.

Another planet in Capricorn is The Weeknd’s Saturn.

This suggests he’s a man who values honesty and respectability.

… one of their negative poles is melancholy, sullenness, and bitterness.

Abel’s interview in the time of quarantine last 2020 comes to mind when he said it felt lonely being all alone at home, and the quarantine period was particularly a lonely time for him.

Despite its name, Aquarius is a water sign, which means Aquarians like to use their minds at every opportunity they can. Mental stimulation is important to them, and without one, they’re often bored and unmotivated.

They’re born quiet and shy but are energetic and even eccentric to the people they are close with.

… Abel rarely does interviews because of his anxiety about his speaking skills. He also rarely socializes with people he’s not close with.

Though shy and reserved, Aquarius are generous people. They love helping people, and they have the ability to see without prejudice on both sides…

… and that makes them great problem solvers too!

As most reserved people are, they’re very good listeners as they would rather listen to you than talk about themselves.

Yes, I know what you’re thinking.

An Aquarius might just be one of the best companions you could ever wish for.

But if done wrong or excessively, their reserved nature could turn into aloofness, which is their negative pole.

Pluto is also one of his dominating planets. It’s in Scorpio.

Pluto suggests a fear of betrayal and sensuality – things that are quite clearly seen through his lyrics and every title track.

It also represents a darker and deeper nature that may be repressed or buried.

.. .you don’t have to look further than his Beauty Behind the Madness, as well as his mysterious posts at the beginning of his career.

… his personality traits – in accordance with his horoscope – suggests he’s a reserved man with a lot of emotions under the surface.

… he’s still as driven with his ambitions and life path as well.

An Aquarian values his freedom and individuality and boxing them will most likely be impossible.
Click to Tweet

If you’re looking for an honest opinion, you should go to your Aquarius friends. They could be brutally honest.

Aquarius people rarely see the point of trying to fit in even with their friends. They like to keep it genuine.

They have the ability to work hard for good money and still spend all those in a blink of an eye.

Aquarians love staying at home, especially during the weekends when people love partying and having fun.

An Aquarian values his freedom and individuality and boxing them will most likely be impossible.

The Weeknd and Gigi Hadid

The Weeknd has an intriguing relationship with on-and-off girlfriend model Bella Hadid.

The couple started dating in 2015 before splitting in 2016. The Weeknd had a 10-month flame with pop princess Selena Gomez before going back to Bella once again.

In one of his lyrics, The Weeknd seems to admit that even though he had been with another girl, it was always Bella.

As of now, they’re reported to being friends again…for the nth time.

But as Bella seems to be the only girl Abel always sees, let’s explore this couple’s relationship according to the zodiac.

Libras are very fascinating, especially when in love. Their charm lies in the fact that they’re very sure of themselves and can carry themselves with finesse.

They’re very generous with their partners. They love to spoil and be spoiled.

They’re also characterized by their carefree approach to life – a good balance with Abel’s Aquarian melancholy.

Maybe that’s why he kept on running back to her after all.

The two are said to be on friendly terms and are “best friends.”

Well, we won’t be surprised if they happen to date again!

How Compatible Are You With The Weeknd

In case you’re wondering if you’re a good fit for an Aquarian, you must first know that Aquarians love their freedom.

Getting involved with one means being okay with long hours – or even days – of being away from them because your Aquarius might be busy chasing after their dreams.

Any attempt of keeping them closer could just make them run for the hills instead.

Other signs compatible with Aquarius are Aries, Gemini, Libra, and Sagittarius.

Want to know if you have similar traits as The Weeknd? Check out this link! Enjoy!

What is The Weeknd Birth Stone?

As Abel was born in the month of February, his birthstone is the stunning Amethyst.

The name Amethyst came from the Greek word améthystos which translates as “not intoxicated.” Ancient stories said that this stone protects its owner from drunkenness.

This gem is very popular because of its attractive color that ranges from pinkish to purplish hue. One of the very few stones with a unique purple color, Amethyst is a variation of Quartz.

To say that The Weeknd’s Zodiac sign is as intriguing as his personality would be a huge understatement.

We hope this take on The Weeknd’s Astrology is able to shed some light on the award-winning singer-songwriter’s very complicated personality.

If you want to know more about The Weeknd, check out his Net Worth pages on BounceMojo.