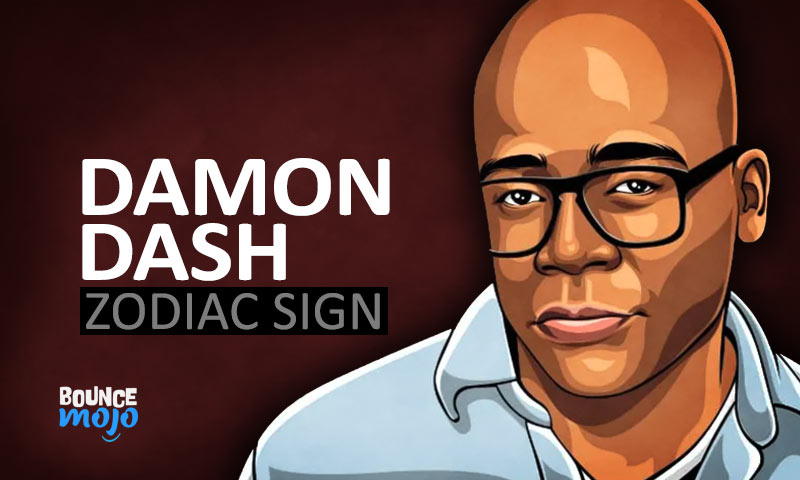 Well, that can explain his wealth and popularity. Taurus men are among those who are more likely to become successful because they’re very hardworking and dedicated.

… before Dame Dash became this successful, he was selling newspapers when he was a teenager and swept floors at a local barbershop in New York City. He had to work for himself at a very young age of 15 since his mother died.

… we will also be talking about:

So, be ready and buckle your seatbelts.

Damon Dash’s birth chart reflects all the celestial bodies in the sky when and where he was born.

The houses’ designation is centered around Dash’s birth time and starts with the rising sign (seen as a pink-colored line from the graphic’s center to the left). It continues anti-clockwise.

The sun in Dame Dash’s birth chart represents his strong will, charm, and appreciation for the arts. The sun also describes his passion for seeking the good things of life.

The moon presents his bravery, courageousness, and honesty. He also likes to take risks and is likely to develop fairness to it.

Behind Dame Dash’s success and fame is a Taurus in him!

It was on May 3rd of 1971, in New York, United States when Damon Anthony “Dame” Dash was born. Taurus is the zodiac sign to people who are born between April 21 and May 21.

A Taurus is an earth sign – it represents “The Bull.” It’s one of the signs that have a high level of persistence, reliability, and stability. They, too, are very consistent.

In addition to that….

… Taurus is the sign of strivers who are likely to have the determination to reach their aspirations.

Taurus men have good taste in music, are romance experts, and have working hands!

Don’t all of these fit the description for Dame Dash as a Taurus?

Dame Dash worked at a very young age. Things were tough when he was young. But all of it paid off. Now, he’s earning lots of money with a net worth of $2 million.

A Bull Can Get You By Its Horns

Be careful not to mess with Dame Dash as he can be pretty mad about it and aggressive.

Dame Dash and Jay-Z have worked together in the Roc-A-Fella Records, where Dame Dash was Jay-Z’s manager. The two did a tour and made $19 million.

Dame Dash was filed a case by Rachel Roy against the lack of child support for their kids.

Dame Dash had a conflict with his brothers Conte, Jeremy, and Bobby once. But later, he set his ego aside and was able to create peace and move forward.

Dame Dash once had a relationship with the late singer, actress, and model Aaliyah Dana Haughton. The late Aaliyah was a Capricorn, born on January 17, 1979, in Brooklyn, New York. Unfortunately, she died in a plane crash on August 25, 2001.

Dame Dash and Aaliyah were once a perfect fit for each other. Taurus and Capricorn have a lot of similarities, including a strong work ethic and genuine personality.

They could’ve still been together if Aaliyah was still alive.

Dame and Rachel had a lot of similarities, but they didn’t last that long.

Other than Aaliyah, Rachel, and Raquel, Dame Dash also had relationships with Linda Williams and Cindy Morales, with whom he had children.

American-Canadian actor and professional wrestler Dwayne Douglas Johnson – also known as “The Rock” – was born on May 2, 1972.

American actress and businesswoman Jessica Alba was born on April 28, 1981.

English former football player and current president and co-owner of Miami CF David Robert Joseph Beckham was born on May 2, 1975.

English singer-songwriter Adele Laurie Blue Adkins was born on May 5, 1988.

Spanish actress and model Penelope Cruz was born on April 28, 1974.

English actor Henry William Dalgliesh Cavill was born on May 5, 1983.

American actress and comedian Aidan Mackenzy Bryant was born on May 7, 1987.

American actress, singer, and activist Rosario Isabel Dawson was born on May 9, 1979.

To know more about the Dame Dash Zodiac Sign, Taurus, here are ten more facts of being a Taurean

Want to know if you have similar traits as Dame Dash? Check out this link! Enjoy!

What is Damon Dash Birth Stone?

As a person born in May, Dame Dash’s birthstone is an Emerald. It’s known for “the stones of successful love” and is often associated with intuition, good memory, wisdom, and higher vision.

It’s a representation of rebirth, good fortune, and youth. It came from the word “smaragdus,” which means green. In the early times, Emerald was highly worshipped since it’s known to have multiple beneficial properties. It was used as a stone for fertility, calming, and also an amulet.

… Emerald is the favorite gem of the Queen in Egypt, Cleopatra.

Being a Taurean is so adventurous and fun. Their personality is very unique – welcoming and cautious all at the same time!

If you hope to read more about Damon Dash’s Biography and Net Worth articles, check out bouncemojo.com.

We hope you’ve enjoyed your reading and that you’re provided with so much Taurus information.